Hello everybody! Recently I went to Philadelphia for a weekend getaway!

We go every year, because of a huge chess tournament that my brother and I participate in. And also because my parents met in Philly, and love to visit.

The day after Thanksgiving, we got in our car and drove down. I spent the whole time listening to Grace Vanderwaal music and reading a book. When we finally got there, food was our first priority. Now, you might already know this, but cheesestakes are my dad and my brother’s very favorite food. And the best cheesetakes ever, are found in Philadelphia. So the boys got some cheesestakes and I went for some donuts. “Donuts?” you say? “Donuts!” I say. 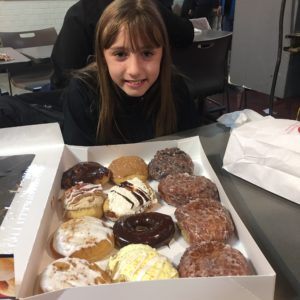 If you ever go to Philadelphia, go to Reading Terminal and buy yourself some Amish donuts from Beilers. I have never tasted a better donut. THEY ARE A MUST!!! Their fritters are very good, if you want a flavor suggestion.

I won my first two games, and salvaged a draw in my third game.  Draws are like ties.  For each win, you get one point, for each draw you get 1/2 a point.  For a loss, nothing happens. So at the end of the first day, I had 2 1/2 points.  “Wait what?” You might say. “Three games in a whole day?” Yes, but each person has 45minutes on their clock, and once their time runs out, they lose. “Yeah but still, 45 minutes just to play a game?” You might say.  And I agree a little, but  I use all of my time for most of my games.  And I have to say, that’s one of the shorter tournament games I’ve played.  This game requires a lot of thinking. 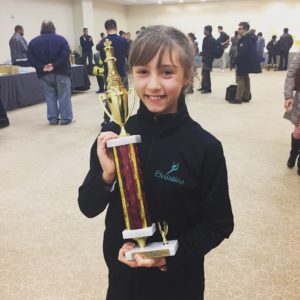 The next morning, after a lovely breakfast of cereal, I played my next game. And lost.  I was a little bit annoyed, but more focused on winning my remaining two games.  I crushed my last two opponents, and when the award ceremony came, and I delightfully surprised to find out that I had won 3rd place!!!  I had expected to win 5th or 6th, so this was very cool, especially with only 4 1/2 out of 6 points! My rating went up 113 points!

Later that night I departed for NYC, but I had a wonderful weekend, and I definitely recommend that you join me next year at the tournament!!!!!!